Located at the mouth of the river Hamble, Warsash was a small timber and fishing port and also a landing-place for the Hamble-Warsash ferry - an important link in an historic route between Portsmouth and Southampton. The area became notable in the nineteenth century for its strawberry growing.

At the crossroads in the centre of the village there is an unusual clocktower built in about 1900. This is an example of Warsash's Edwardian building and prosperity, when people came from miles around for crab and lobster and strawberry teas.

Hook, located nearby, was of earlier importance, as a 'dockyard' in the Hundred Years War; it later became The Hook Estate of the Hornby family. More recently Warsash has grown to be one of the many suburbs in the Portsmouth to Southampton corridor.

History of the Band 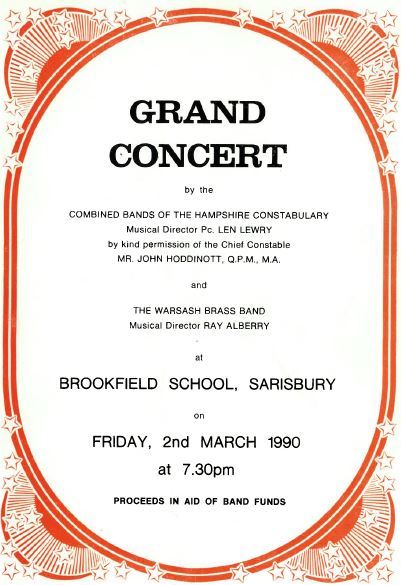 The Warsash Band was formed in 1981 when two Warsash residents, Chris Gorham and Millie Smith, discovered a shared interest in brass band music. With four players in each family, a band was formed, conducted by Miss James from Locks Heath School.

This initial core quickly expanded as other children joined in the music making. The Webber family and others had joined the group and 'Warsash Brass', as it was then known, was giving regular concerts at the Victory Hall and performing at local fetes. Rehearsals took place at St Mary's Church, where they are still held today.

In 1984, former Royal Marine bandmaster Ray Alberry agreed to take on the role of Director of Music. His experience with the Royal Marines Band Service and conducting the Fareham Youth Wind Band, which he co-founded in 1970, proved invaluable and the next few years saw the band grow in strength and quality.

The band was fortunate to be joined by Bob Hemming, a professional trumpet player, and Dave Gasser, a professional military saxophonist, both Warsash residents. They provided invaluable support and guidance to the young players.

1984 also saw the band's first exchange visit to Vannes in Brittany. Many other visits have since been enjoyed.

Ray Alberry retired in 1991 and Dave Gasser took up the baton, subsequently giving 23 years loyal service conducting the band. His military band contacts allowed him to expand the band's library and repertoire and the band continued to develop and grow. 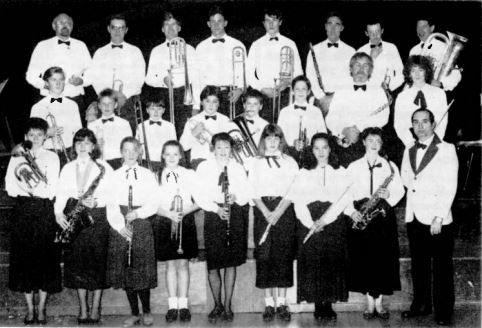 By the end of the first decade of Warsash Brass, the original core of brass players had been gradually bolstered by an increasing number of woodwind players and the name was changed to Warsash Band.

The band continues to perform at the Victory Hall as well as events, fetes and festivals around the region. With over 75 members the band now boasts both a main band and a training band, enabling music to be enjoyed by musicians of all abilities.

Some of the young players from those early days now take prominent roles in both the music and the organisation of the band.

Jon Audain's appointment as Director of Music in 2014 brought a new energy to the band and has ensured a bright future for many years to come.

Come and see us at Winchester Buttercross on Saturday 4 December. Full details here.